The smallest and final pyramid to be discussed as part of our investigation of the great pyramids of Giza is the monument constructed by Pharaoh Menkaure (possibly known as Mycerinos to the Greeks).

Standing at a mere 213 feet tall, Menkaure’s pyramid seems insignificant when compared to its sister structures. However, the pyramid chambers within this smaller monument are much more complex than those found in Khafre’s pyramid and include a chamber of decorative panels, one of six large niches, and a burial chamber lined with massive granite blocks. A black stone sarcophagus, carved with beautiful niched panels, was discovered inside the burial chamber, but was later lost at sea as it was being transported to England. 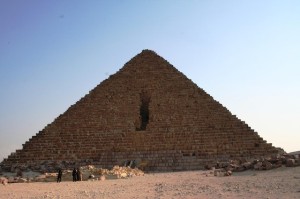 The Pharaoh Menkaure died unexpectedly during the construction of the pyramid and its complex, and therefore work was abandoned. However, remains of mud brick found on the pyramid reveal that at some point after Menkaure’s death, the complex was completed, though not as Menkaure originally intended. The most plausible theory in regards to the completion of the complex is that Menkaure’s heir, Shepseskaf, returned to the site and completed the work using mud brick.

Although his pyramid and complex were not fully completed as planned, many statues of the pharaoh were found in Menkaure’s mortuary and valley temples.One example of this statuary (and one of my favorite pieces of statuary in Egyptian history) consists of a beautiful diad* depicting the king and his primary queen Khamerernebty II which now resides at the Museum of Fine Arts, Boston.This exquisite statue was accompanied by a number of triads depicting the king with various deities which would have originally been set up surrounding the open court of the valley temple.This temple was still an active cult location late into the Old Kingdom, but was entirely reconstructed at the end of the 6th dynasty after it was heavily damaged by a flood.

Although Menkaure’s pyramid was not the largest and his complex not the most impressive of the three, when modern man calls to mind an image of the Giza Plateau, we see the points of all three pyramids standing against the blue Egyptian sky. The third pyramid and complex seem to somehow complete the whole.

Perhaps it’s as the wise man said in Schoolhouse Rock: