The sale of Ancient Egyptian artifacts took a step in a dangerous direction last week.

The Northampton Museum and Art Gallery in the United Kingdom has planned an immense expansion which would double the size of its exhibition space, as well as create new galleries, teaching spaces, and retail areas. The expansion is projected to cost £14 million (or just under $24 million), and the museum has slated for part of these funds to come from the sale of a unique Egyptian statue of a man named Sekhemka. 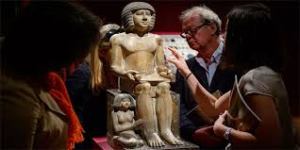 (courtesy of the Getty)

Titled as “Inspector of Scribes in the House of Largesse, one revered before the Great God”, the statue of Sekhemka was most likely produced around 2400 BC. Standing at 30in (76cm) tall, the limestone figure sits with a scroll in hand and his wife Siitmerit seated at his feet. In antiquity, the statue would have been presented with offerings of beer, bread, wine, oil, and linen by family members of the deceased in order to help provide for the spirit of the deceased in the afterlife. The figurine is believed to have been acquired by Spencer Compton, the second Marquis of Northampton, and brought back from Egypt after he journeyed there around 1850. It was later gifted to Northampton’s museums by the 4th Marquis of Northampton in 1880.

When the news was released that the statue would be auctioned off at Christie’s London on July 10th, the world responded with great disapproval. 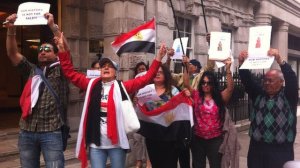 A group of Northampton residents formed the Save Sekhemka Action Group and protested the sale of the statue by having members present outside the Christie’s auction. A spokeswoman for the group, Sue Edwards, claimed that it was “the blackest day in Northampton’s cultural history”, further adding that the town had been “shamed across the world.” The Egyptian Ambassador to Britain Ahsraf Elkholy strongly expressed his personal disdain with the situation, commenting that “Sekhemka belongs to Egypt and if Northampton borough council does not want it then it must be given back. It’s not ethical that it will be sold for profit and also not acceptable.” Adding to the severity of the situation, Arts Council England announced it would be reviewing the museum’s accreditation status post-sale, potentially jeopardizing the museum’s eligibility for grant funding for future projects and programming.

Despite the backlash that occured, the Northampton museum did not back down. According to Mackintosh, “It’s been in our ownership for over 100 years and it’s never really been the centerpiece of our collection; We want to expand our museum and to do that we need to raise the money.” 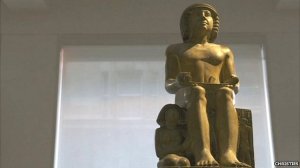 Humankind is lucky to have the opportunity to view and study amazing works of art from antiquity. All artifacts cannot be the “Centerpiece of a Collection”, but that in no way diminishes their cultural and historical value. Although building and planning for the future is an important and necessary progression, museums have an obligation to visitors and to the cultures/artists of the past, to safeguard these treasures and make them available to as many visitors and scholars as possible. In a time when arts funding is dwindling, we all sympathize with the financial need the Northampton museum may be experiencing, but the sale of artifacts, particularly of those gifted to the institution, is unacceptable.

Sekhemka’s story is not yet over. The identity of the buyer has not yet been releases and there is still hope that they may come to their senses and donate the work to a museum or send it back to Egypt.

“Those who choose to approach the sale of collections cynically or with little regard for the sectoral standards or their long-term responsibilities will only further alienate both key funders and the public who put their trust in them to care for our shared inheritance” ~Scott Furlong, director at Arts Council England