Of all the ancient Egyptian “treasures” I have in my collection, the one that is most precious to me is a scarab necklace given to me by my parents. It has become my good luck charm, worn to almost every interview, class presentation, and stressful event I can remember; but is this how the ancient Egyptians would have used the scarab amulet? Am I completely off-base?

Scarabs are one of the most revered zoomorphic symbols in the ancient Egyptian religion, although it is highly unlikely that you would uncover a horde of scarabs in a tomb like our friends in The Mummy:

The scarab served as the ancient Egyptian version of the Christian Cross; a symbol of protection and the journey of rebirth.  It is often associated with the sun god, Re, but this association arose from the Egyptians’ misunderstanding of the scarab’s life cycle. As described by the Met Museum,

An adult beetle lays its eggs inside a ball of dung, which is then buried underground. When the young beetles hatch, the only portion of this process easily visible to an observer is the beetle emerging fully developed from a dung ball, a seemingly magical event. Thus, the Egyptian word for scarab translates as “to come into being.”  The scarab forms food balls out of fresh dung using its back legs to push the oversized spheres along the ground toward its burrow. The Egyptians equated this process with the sun’s daily cycle across the sky, believing that a giant scarab moved the sun from the eastern horizon to the west each day, making the amulet a potent symbol of rebirth.*

*unmentioned in the article, the Egyptian word for scarab is hprr, which inspires the name of the god Khepri, the god of creation. The ‘Khepri name’ is also one of the titles of the pharaoh (but more on that later!).

This association with rebirth is illustrated through the collection of scarab iconography found during various excavations.  In one iteration, scarabs are a cheap and common charm, which ancient Egyptians could easily afford and would often wear each day, possibly strung on a cord as a necklace. This form of the scarab provided protective powers that warded off evil and brought blessings to the wearer. A second iteration of the scarab is the seal; these seals bore the name of the pharaoh, royal officials, or religious figures and functioned much like a Christian medal or scapular of a saint or holy prayer or image, providing protection and guidance through this world and potentially the next. The most important iteration of the scarab in the funerary tradition, where scarabs were wrapped between the layers of the mummy cloth and specifically set over the heart to help provide safe journey and offer guidance as the soul of the deceased traveled into the next life.

Knowing the ancient Egyptians’ obsession with death and the afterlife, it is clear that the scarab held immense symbolic power for all Egyptians, and was a necessary entity to their success in both this life and the next.  Now, if you’ll pardon me, I’ve got to find my necklace before I start my Masters Thesis… 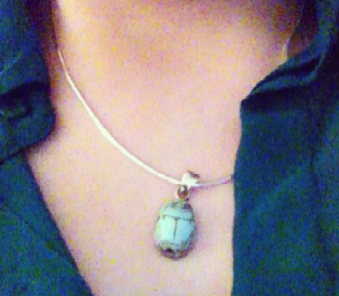 Exploring the archaeology, myths, locations, and art of Tomb Raider.